As per Bar Council of India rules, we are not permitted to solicit work or advertise. The user acknowledges the following:

Mattel Inc. (hereinafter referred to as Plaintiff) is an international toy manufacturer dealing in Dolls, Vehicles, Action Figures, Games, Construction, Plush etc. since the year 1945. The Plaintiff also owns various popular intellectual properties or licenses in partnership with global entertainment companies. The Plaintiff was merged with Fisher-Price in the year 1993 and had become one of the leading manufacturers and seller of toys for children/toddlers world-wide. According to the claims made by the Plaintiff, they had adopted the trademark ‘KICK AND PLAY’ in the year 2010 and has been continuously using it since 2012. In the year 2012, the Plaintiff also created a cartoon character family in the name of ‘Rainforest Family’ which included the following characters: – 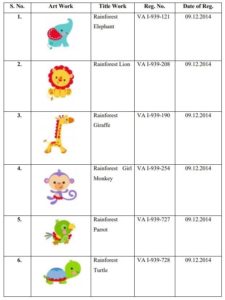 The Plaintiff claimed to have launched ‘Infant to Toddler Rocker’ in the year 2017 featuring the ‘Rainforest Family’. Subsequently, the products relating to ‘Infant to Toddler’ were launched in India in the year 2018. The plaintiff invested enormously in promotion and advertising of the product worldwide. On 13th August, 2020 the plaintiff applied for registration of the trademark ‘KICK AND PLAY’ in Class-28 in India and on 9th September, 2020 applied for the registration of the shape mark of its ‘KICK AND PLAY’ baby gym in Class-28 in India.

In the instant suit, the Plaintiff has filed a copyright infringement with respect to the six characters of the ‘Rainforest Family’; passing off the goods of the Defendants that use the Plaintiff’s trademark ‘KICK AND PLAY’; and the violation of the shape mark of its ‘KICK AND PLAY’ baby gym.

The Plaintiff relied upon Section 40 of the Copyright Act, 1957 which deals the Powers to extend copyright to foreign works, thereby contending that the copyright granted in USA in respect of the six characters of the ‘Rainforest Family’ shall be extended in India as per the terms of International Copyright order notified in the Official Gazette on March 24, 1999.

The Court recognised the six characters of the ‘Rainforest Family’ to have been uniquely prepared with the unique colour combination which is attractive and appealing to the children and by virtue of Section 40 of the Copyright Act, registrations in favour of the plaintiff in respect of six characters in USA would also extend to India in terms of International Copyright order notified in the Official Gazette on 24th March, 1999.

Ex-parte interim injunction & John Doe Order: The Hon’ble Court issued an ex-parte interim injunction in favour of the Plaintiffs and against the Defendants. Nos. 1, 2, 3 and other Defendants sought to be impleaded as John Doe as Defendant No.5, against violating of the Plaintiff’s Copyright in six animal characters of the ‘Rainforest Family’ in any manner till the next date of hearing.

Trademark Violation: The Hon’ble Court was of the view that any ad-interim injunction with respect to trademark violation of Plaintiff’s word mark ‘KICK AND PLAY’ as also the design mark, to be given only after the Defendants have been granted an opportunity of hearing.

Removal of listing on Flipkart (Defendant No. 4): The Hon’ble Court directed the E-Commerce platform, Flipkart, to remove all the listings which relate to the advertisement and sale of the products which violate the copyright of the Plaintiff in the six characters of the ‘Rainforest Family’ within 48 hours from the date of the said order.